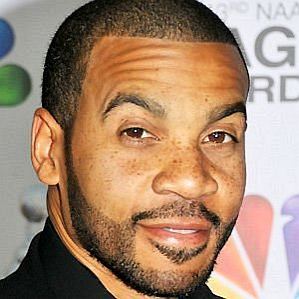 Aaron D. Spears is a 49-year-old American TV Actor from Washington D.C, United States. He was born on Saturday, July 10, 1971. Is Aaron D. Spears married or single, and who is he dating now? Let’s find out!

He grew up playing sports which he used as a strength to launch into acting.

Fun Fact: On the day of Aaron D. Spears’s birth, "It's Too Late/I Feel The Earth Move" by Carole King was the number 1 song on The Billboard Hot 100 and Richard Nixon (Republican) was the U.S. President.

Aaron D. Spears is single. He is not dating anyone currently. Aaron had at least 1 relationship in the past. Aaron D. Spears has not been previously engaged. He grew up with his family in Washington D.C. According to our records, he has no children.

Like many celebrities and famous people, Aaron keeps his personal and love life private. Check back often as we will continue to update this page with new relationship details. Let’s take a look at Aaron D. Spears past relationships, ex-girlfriends and previous hookups.

Aaron D. Spears was born on the 10th of July in 1971 (Generation X). Generation X, known as the "sandwich" generation, was born between 1965 and 1980. They are lodged in between the two big well-known generations, the Baby Boomers and the Millennials. Unlike the Baby Boomer generation, Generation X is focused more on work-life balance rather than following the straight-and-narrow path of Corporate America.
Aaron’s life path number is 8.

Aaron D. Spears is turning 50 in

Aaron D. Spears has no children.

Is Aaron D. Spears having any relationship affair?

Was Aaron D. Spears ever been engaged?

Aaron D. Spears has not been previously engaged.

How rich is Aaron D. Spears?

Discover the net worth of Aaron D. Spears on CelebsMoney

Aaron D. Spears’s birth sign is Cancer and he has a ruling planet of Moon.

Fact Check: We strive for accuracy and fairness. If you see something that doesn’t look right, contact us. This page is updated often with new details about Aaron D. Spears. Bookmark this page and come back for updates.