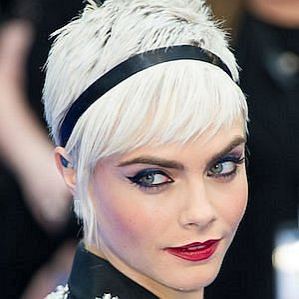 Cara Delevingne is a 28-year-old British Model from London, England. She was born on Wednesday, August 12, 1992. Is Cara Delevingne married or single, who is she dating now and previously?

As of 2021, Cara Delevingne is dating Ashley Benson.

Cara Jocelyn Delevingne is an English model and actress. She signed with Storm Model Management after leaving school in 2009. Delevingne won the “Model of the Year” award at the British Fashion Awards in 2012 and 2014 and has appeared in shows for houses including Burberry, Chanel, Mulberry, Dolce & Gabbana, and Jason Wu. She started her acting career with a minor role in the 2012 film adaptation of Anna Karenina. Her first major roles were as Margo Roth Spiegelman in the romantic mystery film Paper Towns (2015), Kath Talent in London Fields, and the Enchantress in the comic book film Suicide Squad (2016). In 2017 she starred in Luc Besson’s Valerian and the City of a Thousand Planets as one of the main characters. She attended Bedales School in Hampshire, England.

Fun Fact: On the day of Cara Delevingne’s birth, "End Of The Road (From "Boomerang")" by Boyz II Men was the number 1 song on The Billboard Hot 100 and George H. W. Bush (Republican) was the U.S. President.

Cara Delevingne’s girlfriend is Ashley Benson. They started dating in 2018. Cara had at least 7 relationship in the past. Cara Delevingne has not been previously engaged. Her sister Poppy also worked as a model. She has another sister named Chloe as well. From 2015 to 2016, she dated singer St. Vincent. According to our records, she has no children.

Cara Delevingne’s girlfriend is Ashley Benson. Ashley Benson was born in Anaheim, CA and is currently 31 years old. She is a American TV Actress. The couple started dating in 2018. They’ve been together for approximately 2 years, 11 months, and 2 days.

She became known as Abigail Deveraux on Days of Our Lives, and won a Young Hollywood Award in 2011 with the cast of Pretty Little Liars. In 2012, she appeared in the art film Spring Breakers and she was also cast in the 2015 feature Pixels.

Like many celebrities and famous people, Cara keeps her love life private. Check back often as we will continue to update this page with new relationship details. Let’s take a look at Cara Delevingne past relationships, exes and previous hookups.

Cara Delevingne is turning 29 in

Cara Delevingne was born on the 12th of August, 1992 (Millennials Generation). The first generation to reach adulthood in the new millennium, Millennials are the young technology gurus who thrive on new innovations, startups, and working out of coffee shops. They were the kids of the 1990s who were born roughly between 1980 and 2000. These 20-somethings to early 30-year-olds have redefined the workplace. Time magazine called them “The Me Me Me Generation” because they want it all. They are known as confident, entitled, and depressed.

Cara Delevingne is best known for being a Model. Stunning fashion model who can be seen as the face of Burberry, Chanel, Moschino, Oscar de la Renta, and Stella McCartney. She was ranked #25 on models.com list of the top 50 female models. She was also cast as Margo in the 2015 film Paper Towns, Mermaid in the 2015 film Pan and Enchantress in the 2016 film Suicide Squad. Like Tyra Banks, she has walked the runways for the top designers in the world, including Karl Lagerfeld and Calvin Klein.

What is Cara Delevingne marital status?

Who is Cara Delevingne girlfriend now?

Cara Delevingne has no children.

Is Cara Delevingne having any relationship affair?

Was Cara Delevingne ever been engaged?

Cara Delevingne has not been previously engaged.

How rich is Cara Delevingne?

Discover the net worth of Cara Delevingne on CelebsMoney or at NetWorthStatus.

Cara Delevingne’s birth sign is Leo and she has a ruling planet of Sun.

Fact Check: We strive for accuracy and fairness. If you see something that doesn’t look right, contact us. This page is updated often with new details about Cara Delevingne. Bookmark this page and come back for updates.