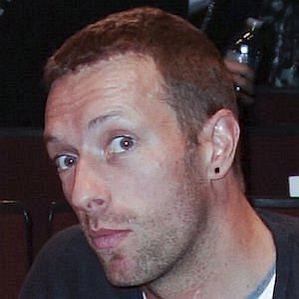 Chris Martin is a 44-year-old British Pop Singer from Exeter, Devon, England, UK. He was born on Wednesday, March 2, 1977. Is Chris Martin married or single, who is he dating now and previously?

Christopher Anthony John Martin is an English singer, songwriter, musician, record producer, and philanthropist. He is the lead singer and co-founder of the rock band Coldplay. Born in Exeter in Devon, Martin went to University College London where he formed a rock band with Jonny Buckland in 1996 called Pectoralz, which was eventually renamed Coldplay in 1998. His first performance with the band The Rocking Honkies received boos from the crowd. Coldplay was named Pectoralz, then Starfish, before another band let Martin and his bandmates have the name Coldplay.

Fun Fact: On the day of Chris Martin’s birth, "Evergreen (Love Theme From "A Star Is Born")" by Barbra Streisand was the number 1 song on The Billboard Hot 100 and Jimmy Carter (Democratic) was the U.S. President.

Chris Martin’s girlfriend is Dakota Johnson. They started dating in 2017. Chris had at least 8 relationship in the past. Chris Martin has not been previously engaged. He married Gwyneth Paltrow on December 5, 2003 and they had a daughter named Apple and a son named Moses together. In March 2014, the couple announced that they were separating. He then dated Hunger Games actress Jennifer Lawrence for about five months. According to our records, he has 2 children.

Chris Martin’s girlfriend is Dakota Johnson. Dakota Johnson was born in Austin, TX and is currently 32 years old. He is a American Movie Actress. The couple started dating in 2017. They’ve been together for approximately 4 years, 2 months, and 4 days.

Chris Martin is turning 45 in

Chris Martin was born on the 2nd of March, 1977 (Generation X). Generation X, known as the "sandwich" generation, was born between 1965 and 1980. They are lodged in between the two big well-known generations, the Baby Boomers and the Millennials. Unlike the Baby Boomer generation, Generation X is focused more on work-life balance rather than following the straight-and-narrow path of Corporate America.
Chris was born in the 1970s. The 1970s were an era of economic struggle, cultural change, and technological innovation. The Seventies saw many women's rights, gay rights, and environmental movements.

Chris Martin is best known for being a Pop Singer. Founder of the pop rock band Coldplay, which reached success with the album Parachutes and won a Grammy Award for Song of the Year for “Clocks.” He has also worked as a soloist, collaborating with artists like Rihanna. He sang R.E.M.’s “Nightswimming” with frontman Michael Stipe on the Austin City Limits TV show.

Chris Martin’s birth sign is Pisces and he has a ruling planet of Neptune.

Fact Check: We strive for accuracy and fairness. If you see something that doesn’t look right, contact us. This page is updated often with latest details about Chris Martin. Bookmark this page and come back for updates.