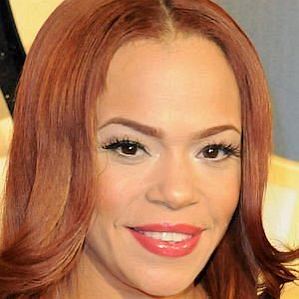 Faith Evans is a 48-year-old American R&B Singer from Lakeland, Florida, USA. She was born on Sunday, June 10, 1973. Is Faith Evans married or single, who is she dating now and previously?

Faith Renee Evans is an American singer-songwriter, record producer, and actress. Born in Lakeland, Florida and raised in New Jersey, Evans relocated to Los Angeles in 1993 for a career in the music business. After working as a backing vocalist for Al B. Sure and Christopher Williams, she became the first female artist to contract with Sean “Puff Daddy” Combs’ Bad Boy Entertainment recording company in 1994, for which she collaborated with several label mates such as Mary J. Blige and Carl Thomas and released three platinum-certified studio albums between 1995 and 2001, including Faith and Faithfully (2001). She began singing gospel music at her local church and briefly attended Fordham University.

Fun Fact: On the day of Faith Evans’s birth, "My Love" by Paul McCartney And Wings was the number 1 song on The Billboard Hot 100 and Richard Nixon (Republican) was the U.S. President.

Faith Evans’s husband is Stevie J.. They got married in 2016. Faith had at least 6 relationship in the past. Faith Evans has not been previously engaged. She was married to the Notorious B.I.G, with whom she had a son named Christopher Jr. and a daughter named T’yanna. She also has two other sons named Ryder and Joshua and a daughter named Chyna. According to our records, she has 4 children.

Faith Evans’s husband is Stevie J.. Stevie J. was born in Buffalo, NY and is currently 50 years old. He is a R&B Singer. The couple started dating in 2016. They’ve been together for approximately 5 years, 10 months, and 13 days.

Faith Evans’s husband is a Scorpio and she is a Gemini.

Faith Evans has a ruling planet of Mercury.

Like many celebrities and famous people, Faith keeps her love life private. Check back often as we will continue to update this page with new relationship details. Let’s take a look at Faith Evans past relationships, exes and previous hookups.

Faith Evans is turning 49 in

Faith Evans was previously married to Todd Russaw (1998 – 2011) and The Notorious B.I.G. (1994 – 1997). She has not been previously engaged. Faith Evans has been in a relationship with Kiyamma Griffin (1992 – 1993). We are currently in process of looking up more information on the previous dates and hookups.

Faith Evans was born on the 10th of June, 1973 (Generation X). Generation X, known as the "sandwich" generation, was born between 1965 and 1980. They are lodged in between the two big well-known generations, the Baby Boomers and the Millennials. Unlike the Baby Boomer generation, Generation X is focused more on work-life balance rather than following the straight-and-narrow path of Corporate America.

Faith was born in the 1970s. The 1970s were an era of economic struggle, cultural change, and technological innovation. The Seventies saw many women's rights, gay rights, and environmental movements.

Faith Evans is best known for being a R&B Singer. R&B singer who reached success by selling Platinum-certified records and was signed by Sean P.Diddy Combs to Bad Boy Entertainment. She was on the same record label as Mary J Blige.

What is Faith Evans marital status?

Who is Faith Evans husband?

Is Faith Evans having any relationship affair?

Was Faith Evans ever been engaged?

Faith Evans has not been previously engaged.

How rich is Faith Evans?

Discover the net worth of Faith Evans from CelebsMoney

Faith Evans’s birth sign is Gemini and she has a ruling planet of Mercury.

Fact Check: We strive for accuracy and fairness. If you see something that doesn’t look right, contact us. This page is updated often with latest details about Faith Evans. Bookmark this page and come back for updates.