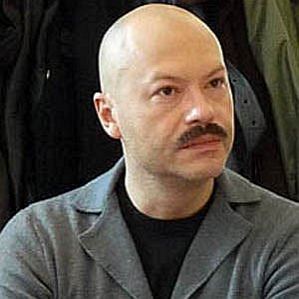 Fedor Bondarchuk is a 54-year-old Russian Director from Moscow, Russia. He was born on Tuesday, May 9, 1967. Is Fedor Bondarchuk married or single, who is he dating now and previously?

As of 2021, Fedor Bondarchuk is married to Paulina Andreeva.

Fedor Sergeyevich Bondarchuk is a Russian film director, actor, TV and film producer, clipmaker, TV host. He is a founder of a production company Art Pictures Studio, creator of acclaimed film The 9th Company, which became the most profitable Russian film at the box office of 2005, the film won 7 film awards and was 8-time nominated. Also Fedor Bondarchuk is producer of the 2006 film Heat, where he starred as himself with his mother Irina Skobtseva. Fedor directed a two-part science fiction film The Inhabited Island based on a novel by Strugatskies. Bondarchuk is a winner of TEFI award in 2003 in nomination The best host of the entertainment TV-show. He is a winner of Golden Eagle Award in 2012 as the Best Actor. He attended the Russian State Institute of Cinematography after being encouraged and inspired by his parents.

Fun Fact: On the day of Fedor Bondarchuk’s birth, "The Happening" by The Supremes was the number 1 song on The Billboard Hot 100 and Lyndon B. Johnson (Democratic) was the U.S. President.

Fedor Bondarchuk’s wife is Paulina Andreeva. They got married in 2015. Fedor had at least 2 relationship in the past. Fedor Bondarchuk has not been previously engaged. His mother was actress Irina Skobtseva and his father was Academy Award-winning director Sergei Bondarchuk. According to our records, he has 2 children.

Fedor Bondarchuk’s wife is Paulina Andreeva. Paulina Andreeva was born in St. Petersburg, Russia and is currently 32 years old. He is a Russian Actress. The couple started dating in 2015. They’ve been together for approximately 6 years, 6 months, and 28 days.

Fedor Bondarchuk’s wife is a Libra and he is a Taurus.

Like many celebrities and famous people, Fedor keeps his love life private. Check back often as we will continue to update this page with new relationship details. Let’s take a look at Fedor Bondarchuk past relationships, exes and previous hookups.

Fedor Bondarchuk is turning 55 in

Fedor Bondarchuk was previously married to Svetlana Bondarchuk. He has not been previously engaged. We are currently in process of looking up more information on the previous dates and hookups.

Fedor Bondarchuk was born on the 9th of May, 1967 (Generation X). Generation X, known as the "sandwich" generation, was born between 1965 and 1980. They are lodged in between the two big well-known generations, the Baby Boomers and the Millennials. Unlike the Baby Boomer generation, Generation X is focused more on work-life balance rather than following the straight-and-narrow path of Corporate America.

Fedor was born in the 1960s. The 1960s was the decade dominated by the Vietnam War, Civil Rights Protests, Cuban Missile Crisis, antiwar protests and saw the assassinations of US President John F. Kennedy and Martin Luther King Jr. It also marked the first man landed on the moon.

Fedor Bondarchuk is popular for being a Director. Russian director of acclaimed film The 9th Company, as well as a Golden Eagle Award-winning actor for his role in the film Two Days. He hosted a show about cinema on Russian TV featuring guests like American director Oliver Stone.

What is Fedor Bondarchuk marital status?

Who is Fedor Bondarchuk wife?

Is Fedor Bondarchuk having any relationship affair?

Was Fedor Bondarchuk ever been engaged?

Fedor Bondarchuk has not been previously engaged.

How rich is Fedor Bondarchuk?

Discover the net worth of Fedor Bondarchuk from CelebsMoney

Fedor Bondarchuk’s birth sign is Taurus and he has a ruling planet of Venus.

Fact Check: We strive for accuracy and fairness. If you see something that doesn’t look right, contact us. This page is updated often with latest details about Fedor Bondarchuk. Bookmark this page and come back for updates.