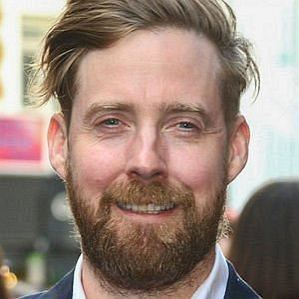 Ricky Wilson is a 43-year-old British Rock Singer from Keighley, Yorkshire, England, UK. He was born on Tuesday, January 17, 1978. Is Ricky Wilson married or single, who is he dating now and previously?

Charles Richard “Ricky” Wilson is the lead singer of English band Kaiser Chiefs, a five piece band from Menston and Guiseley in Leeds, West Yorkshire. Their successful songs include “Ruby”, “I Predict a Riot”, “Never Miss a Beat”, “Oh My God”, “Everyday I Love You Less and Less” and “Coming Home” He previously played in a band called Runston Parva before the formation of the Kaiser Chiefs in 1996.

Fun Fact: On the day of Ricky Wilson’s birth, "Baby Come Back" by Player was the number 1 song on The Billboard Hot 100 and Jimmy Carter (Democratic) was the U.S. President.

Ricky Wilson’s girlfriend is Grace Zito. They started dating in 2018. Ricky had at least 3 relationship in the past. Ricky Wilson has not been previously engaged. He was born in Keighley, West Yorkshire, England. He was in a longterm relationship with Lesley Williams until their split in 2015. According to our records, he has no children.

Like many celebrities and famous people, Ricky keeps his love life private. Check back often as we will continue to update this page with new relationship details. Let’s take a look at Ricky Wilson past relationships, exes and previous hookups.

He has not been previously engaged. Ricky Wilson has been in relationships with Lesley Williams (2010 – 2015) and Fleur Fekkes. We are currently in process of looking up more information on the previous dates and hookups.

Ricky Wilson is turning 44 in

Ricky Wilson was born on the 17th of January, 1978 (Generation X). Generation X, known as the "sandwich" generation, was born between 1965 and 1980. They are lodged in between the two big well-known generations, the Baby Boomers and the Millennials. Unlike the Baby Boomer generation, Generation X is focused more on work-life balance rather than following the straight-and-narrow path of Corporate America.
Ricky was born in the 1970s. The 1970s were an era of economic struggle, cultural change, and technological innovation. The Seventies saw many women's rights, gay rights, and environmental movements.

Ricky Wilson is known for being a Rock Singer. Lead vocalist for the indie rock band Kaiser Chiefs who became a coach on the UK version of The Voice in 2013. He replaced Danny O’Donoghue as a host on The Voice UK.

What is Ricky Wilson marital status?

Who is Ricky Wilson girlfriend now?

Ricky Wilson has no children.

Is Ricky Wilson having any relationship affair?

Was Ricky Wilson ever been engaged?

Ricky Wilson has not been previously engaged.

How rich is Ricky Wilson?

Discover the net worth of Ricky Wilson on CelebsMoney or at NetWorthStatus.

Ricky Wilson’s birth sign is Capricorn and he has a ruling planet of Saturn.

Fact Check: We strive for accuracy and fairness. If you see something that doesn’t look right, contact us. This page is updated often with fresh details about Ricky Wilson. Bookmark this page and come back for updates.