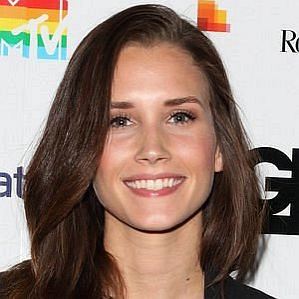 Shannon Beveridge is a 29-year-old American YouTuber from Carrollton, Texas, USA. She was born on Thursday, March 19, 1992. Is Shannon Beveridge married or single, who is she dating now and previously?

As of 2021, Shannon Beveridge is dating Cari Fletcher.

Shannon Beveridge is a YouTuber, actress, and LGBT advocate. Born in Texas, she started her YouTube channel, nowthisisliving, in 2012 and has 513,394 subscribers. She won the best LGBTQ+ YouTube Channel at the 9th Shorty Awards and the LGBT+ Celebrity Rising Star Award at the 2017 British LGBT Awards. She made her acting debut in the short film Piece of Cake in 2016 and appeared in Fletcher’s Wasted Youth video in 2017. Her early videos documented her relationship with fellow YouTuber Cammie Scott. The video explaining their breakup is still her most-watched video ever, with over two million views. She was born in Carrollton, TX and lived in Norman, OK before moving to Los Angeles, CA. She attended the Price College of Business at the University of Oklahoma.

Fun Fact: On the day of Shannon Beveridge’s birth, "Save The Best For Last" by Vanessa Williams was the number 1 song on The Billboard Hot 100 and George H. W. Bush (Republican) was the U.S. President.

Shannon Beveridge’s girlfriend is Cari Fletcher. They started dating in 2017. Shannon had at least 3 relationship in the past. Shannon Beveridge has not been previously engaged. She dated Cammie from November 2012 to May 2016. According to our records, she has no children.

Shannon Beveridge’s girlfriend is Cari Fletcher. Cari Fletcher was born in New Jersey and is currently 27 years old. She is a American Pop Singer. The couple started dating in 2017. They’ve been together for approximately 4 years, 3 months, and 11 days.

Singer and actress who simply goes by Fletcher. She competed on the first season of The X-Factor and has since released the hit singles “War Paint” and “Live Young, Die Free.”

Like many celebrities and famous people, Shannon keeps her love life private. Check back often as we will continue to update this page with new relationship details. Let’s take a look at Shannon Beveridge past relationships, exes and previous hookups.

She has not been previously engaged. Shannon Beveridge has been in relationships with Cammie Scott (2012 – 2016) and Alexis G. Zall. We are currently in process of looking up more information on the previous dates and hookups.

Shannon Beveridge is turning 30 in

Shannon Beveridge was born on the 19th of March, 1992 (Millennials Generation). The first generation to reach adulthood in the new millennium, Millennials are the young technology gurus who thrive on new innovations, startups, and working out of coffee shops. They were the kids of the 1990s who were born roughly between 1980 and 2000. These 20-somethings to early 30-year-olds have redefined the workplace. Time magazine called them “The Me Me Me Generation” because they want it all. They are known as confident, entitled, and depressed.

Shannon Beveridge is best known for being a YouTuber. Rose to fame as one-half of the YouTube channel Nowthisisliving alongside her romantic partner Camden Scott. The two broke up in May 2016. She and Cammie collaborated with fellow YouTube couple Kaelyn and Lucy.

What is Shannon Beveridge marital status?

Who is Shannon Beveridge girlfriend now?

Shannon Beveridge has no children.

Is Shannon Beveridge having any relationship affair?

Was Shannon Beveridge ever been engaged?

Shannon Beveridge has not been previously engaged.

How rich is Shannon Beveridge?

Discover the net worth of Shannon Beveridge on CelebsMoney or at NetWorthStatus.

Shannon Beveridge’s birth sign is Pisces and she has a ruling planet of Neptune.

Fact Check: We strive for accuracy and fairness. If you see something that doesn’t look right, contact us. This page is updated often with new details about Shannon Beveridge. Bookmark this page and come back for updates.